In June 2013, I wrote this intending to submit it to a certain website as one of their popular “lists.” That process turned out to be a huge “We’ll take your idea and change it enough that it no longer resembles what you wanted it to be and is therefore ours and you’ll get a little money for giving us the idea and doing the work.” So forget it, here it is as I feel it should be. Me, the one who came up it and then wrote it. Enjoy.

6 Incredibly Common Things Movies Have Made You Irrationally Afraid Of

Movies are arguably the best form of entertainment we humans can use to escape the monotony of our wretchedly boring and repetitive lives. And though we secretly love the repetition, some ideas that movies have spawned permanently scar our fragile psyches and as a result of being entertained by them, we are scared to do things that we have literally done every single day of our lives up until that point. It’s almost as if we believe that just KNOWING ABOUT a scary story lets that made-up ghost or axe-murderer somehow manifest itself and find you. It’s the same reason that we lock our doors and windows when we watch America’s Most Wanted – we know the escaped criminals don’t know who we are, and they can’t possibly know that we are watching their story on tv, but we still feel better knowing the porch light is on. ‘Cause that’ll stop ’em. HURRY!!! Lock it before someone invisible and imaginary shoves it open!!
(Source: mydeathspace.com )

You have been in cars since before you were born. Heck, you were probably conceived in one! But then you just HAD to watch Christine, and now you think your Civic is jealous of your date.

Or maybe you think that every murderer you’ve ever heard a story about is hiding in your back seat with an axe, a la Urban Legend. That one, actually, you should maybe check on…

But come on. Cars themselves don’t have a mind of their own, do they? They can’t possibly develop their own thoughts and personalities, and start acting under their own will… right?

Thanks to Maximum Overdrive, movie-goers are even afraid of our electric toothbrushes.

Ok, I promise I won’t use you to download any Metallica!

Orphan may not have technically been about an evil child, just like Poltergeist and The Exorcist, among several others, were actually about good kids who were unfortunate enough to be possessed by misbehaved, rambunctious demons. But that doesn’t make us any less afraid when a stranger’s child is staring at us from the grocery cart shaped like a race car.

You’ll still be able to see this when you close your eyes.
(Source: Photobucket.com )

What could be worse than a creepy staring child?
More than one of them.

That’s why Village of the Damned is so rightfully horrifying. An entire town of humans giving birth to dozens of evil alien children? While a very American storyline, that’s one too many unsettling concepts! Generally, you can scare a kid into submission with a stern look or a well-placed expletive, but when you’re out-numbered, the rules change and you’re pretty much screwed. 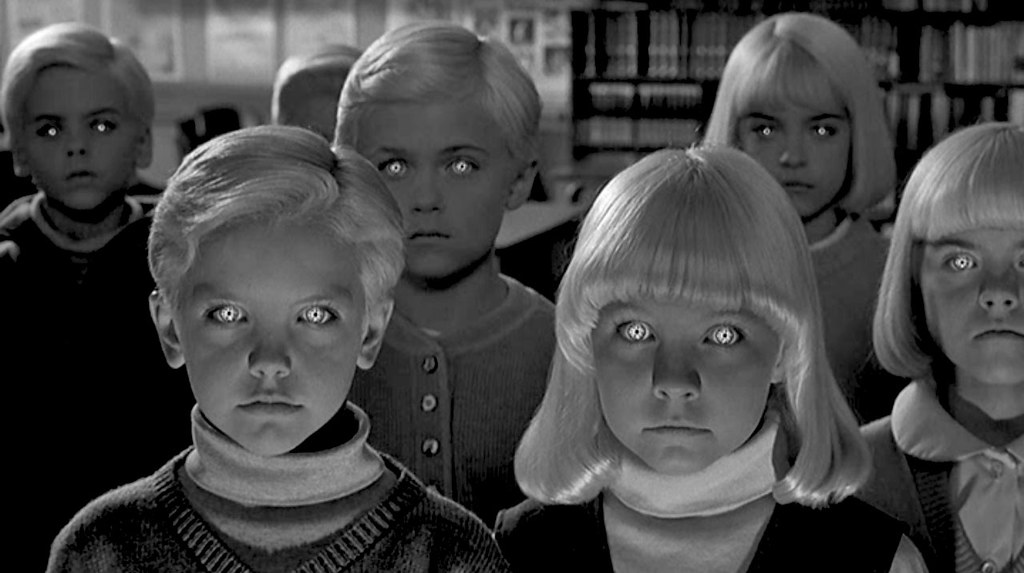 “You must be our new teacher. Our old one is….gone.”
(Source: flickr )

Besides the obvious film for this one, Mirrors, where Kiefer Sutherland can’t stand the sight of his own reflection, there are a crap-heap of movies that have made us want to cover all of our mirrors, or at the very least bury them in our backyards in welded-shut metal boxes surrounded by garlic. These movies are especially hard to watch for those of us who live in Los Angeles, where staring at our own reflections occupies the better part of our day.
But films like Poltergeist 3 take the mirror fear to a ridiculous level. You start noticing how anything that’s remotely smooth casts reflections, which leads you to believe there is NOWHERE you can hide from horrible, horrible death, except the one place where there are NO mirrors: the bathroom at the Shell station. And isn’t being in that hiding place worse than just being slaughtered by some mirror demon? Mary Poppins may not have been classified as a horror movie, but this scene is seriously effing disturbing.
(Source: static.tvtropes.org )

If you’ve never had an irrational fear of the bathroom, you probably didn’t see Psycho as a kid. Or maybe you also missed the boat on the horrors that are Candyman. If you’re also afraid of bees (or if you are a male), then saddle up:

*Watch the Candyman bathroom scene on someone else’s TV*

Speaking of bugs, who doesn’t love the scene in Squirm where worms come sliding out of the shower head and fall into a pile in the tub? To make matters worse, Freddy Krueger had to go and stick his claws all up in the tub! Thanks, Hollywood. Now we can’t shower OR take a bath without imagining all the different ways we can be mutilated.

So, you said you wanted me to leave a “runway,” right?
(Source: gallery.roborooter.com )

Or, if you prefer, you can always just imagine Harrison Ford drowning you.
(Source: blogspot)

If you’re reading this, you were probably just a kid when you saw The Shining, and baths were already something you dreaded. The last thing our mothers needed was for our dads to show us the woman in Room 237. Not only were we afraid to go in there without a cat that could smell danger and therefore warn us of impending demons, but now we also had to run as fast as we could from the bathroom – once even slamming our heads onto the bottom of the top bunk bed as we leaped toward the “safety” of our Little Mermaid blankets.
…No? That didn’t happen to everybody?

This is a level up from playing “Hot Lava,” where you have to jump from the couch to the loveseat without touching the carpet or you “burn to death in lava.” We’re talking grown-up, baffling fear of the Earth itself opening up and releasing unreasonable zombies or giant eff-off worm monsters upon our tiny, girlish ankles. Come on, who hasn’t wanted to do this to an upstairs neighbor who seems to enjoy brick-tossing?
(Source: staticflickr.com )

Tremors may have been a hilarious ode to Kevin Bacon’s flared nostrils, but thanks to that lovely film series, many of us can no longer step out of a car without considering the possibility of being swallowed whole by some saw-tooth-throated radioactive desert worm…

…or perhaps an undead insurance salesman wishes to tell us about how much we can save if we just let him feed off of our frontal lobe? 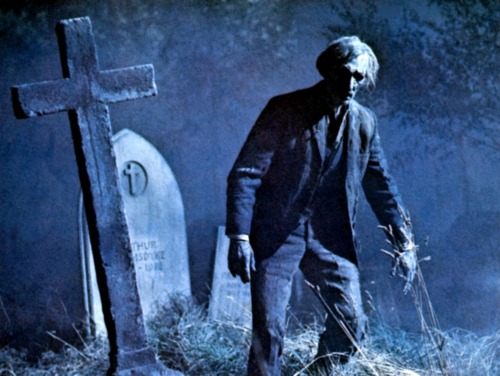 I’d just like to talk to you about the word of God… whom I’ve just spoken to, as it so happens…
(Source: blogspot.com )

If your name is Barbara, chances are you probably don’t wander into cemeteries with your new boyfriends anymore.

Ok, being afraid of things that are out of your control is one thing – so Starbucks is all out of Coconut Syrup until next summer, that’s fine. But then Hollywood plants the lovely little seed in your head that you might have a different personality in your head that wants to kill your loved ones while you sleep? Well, that’s crossing the line!! If you’re lucky, the killer inside you will be an old imaginary friend you can hang with, like in Playroom. One can hope that your homicidal personality will at least be a better dresser than you.
(Source: wordpress.com)

You can’t even go to sleep, because then your brain REALLY takes over, and you can be killed by our aforementioned pal Freddy!